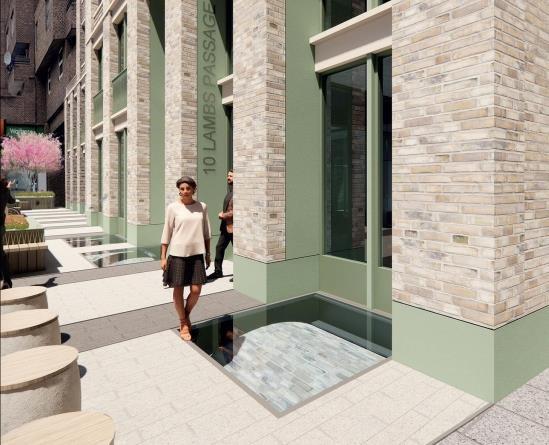 Apt has been given the green light for an office scheme which includes the conversion of a maze of Grade II listed Georgian vaults into bicycle storage and office space.

It will consist of a seven-storey block built on the site of an existing car park and above the underground vaults, which were built by the Whitbread Brewery in the early 19th century. Another series of vaults clad in white ceramic tiles were added in the 1930s.

Whitbread, owner of the Premier Inn hotel chain, was originally founded as a brewery in Islington in 1742 and became the largest brewery in the world by the turn of the century.

The vaults are connected to the Grade II listed Whitbread Brewery building, which is located immediately to the south of the site.

Apt said the project would preserve the integrity of the vaults and retain as much historic fabric as possible, although around 260m² of the area will be demolished to make way for stairs and an elevator core to access the building above. The vaulted roofs will also be exposed at ground level behind glazing to allow the public to see them.

The Islington planning officer said the work would cause less substantial damage to the vaults, which are currently in poor condition, and that there is a public interest in ensuring their upkeep and use.

Later additions, including enclosures built in the 20th century and deemed of no heritage value, would also be removed.

Two previous programs at the site had been turned down, including a hotel and residential program designed by Falconer Chester Hall and Collado Collins that was turned down in 2014 and again in 2015 after an unsuccessful appeal.

The two firms then went back to the drawing board and produced revised plans, which were again refused in 2016 before winning an appeal in 2017, although the project was never built.

Can the Hotel Workers Union save the Democrats?