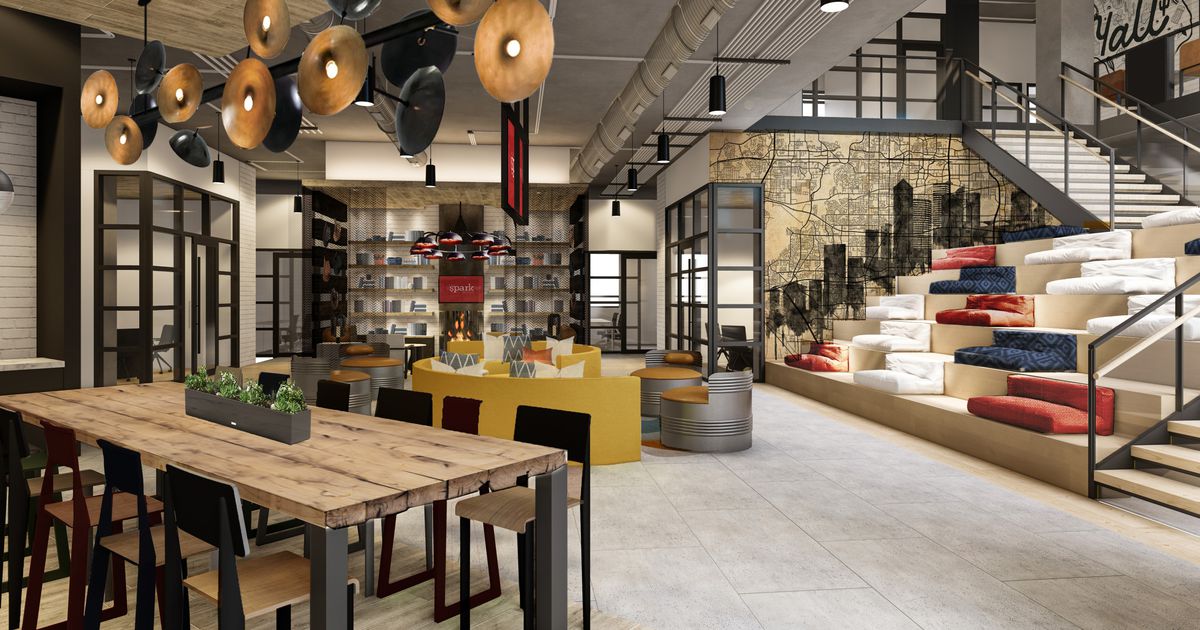 With the next addition to Arlington’s Entertainment District, visitors will have a new place to work and play.

Maryland-based developer Cordish Cos. and the Texas Rangers are bringing a new coworking and business incubator center to the baseball team’s former home at Choctaw Stadium.

“It’s hard to believe we started 2015 with a vote of confidence from the city and look where we are today,” said Cordish COO Zed Smith. “We have a $1 billion development under the cranes, and we still have more to do.

Cordish and the Rangers are building the mixed-use project just south of Interstate 30 near major sports stadiums.

The Texas Live project – the first phase of which opened in 2018 – will include 200,000 square feet of restaurants, retail and entertainment venues, meeting and convention spaces, and an events pavilion in outdoors.

Developers built the Live by Loews hotel in 2019, and the towering Loews Arlington Hotel & Convention Center opened in October.

Earlier this year, construction began near the National Medal of Honor Museum.

Cordish’s next development in Arlington is a five-story, nearly 300-unit apartment and retail building called One Rangers Way on the Nolan Ryan Freeway south of I-30.

“These will be high-end luxury apartments,” Smith said. “We see this all over the country – why not here in Arlington?

“I think that’s just the tip of the iceberg,” he said. “I think there is potential for more residential development here.”

Wednesday’s event at Choctaw Stadium was to detail Cordish Cos. plans for the Spark Coworking Center. Located in the former Texas Rangers offices at the stadium, the shared office center will join other Spark Coworking operations that Cordish has established at home in Baltimore, St Louis and Kansas City.

“Spark will be a major anchor,” Smith said. “It was a commitment Rangers made years ago when they wanted to build the new stadium – they would commit to using that space.”

The former home of the Texas Rangers baseball team was redeveloped after Arlington and the Rangers opened the new stadium in 2020. The old baseball stadium was converted into a multi-purpose sports and entertainment venue operated by Choctaw Casinos & Resorts.

With Spark, Six Flags Entertainment Corp. and the Arlington Visitors Bureau are housed in the Choctaw Stadium offices.

“We launched Spark in 2017, and it was just an idea,” he said. “We saw the opportunity to create something special. It will be huge for the city.

“There will be entrepreneurs with big ideas coming out of Spark in Arlington.”

Cordish aims to create a new hub for local entrepreneurs, start-ups and innovators when it opens this winter.

The two-level coworking facility will include workstations, 61 private offices, 17 suites and workspace balconies with infield views of Globe Life Field and Choctaw Stadium. Other features include a community kitchen, members’ cafe, lounges, meeting rooms, and a podcast studio.

“There will be people who come here and share offices and they become the next entrepreneurs and the next public companies,” said Davis. “Knowing some of the things we’re working on, today won’t be our last announcement.

“It’s another example of reconfiguring this stadium and the commitment we’ve made to keep it here for the long term,” he said. “It was very important to the taxpayers of Arlington and to me personally.”

Cordish and the Rangers’ Arlington development plan aims to get visitors to do more than just watch baseball.

“The idea is to expand the fan experience,” Smith said. “When you come to Texas Live, you get sports and entertainment – ​​that’s what it’s all about.

“They come early and stay late because there’s so much more to do here,” he said. “With the hotels we’re adding, people come to spend a weekend, see a game, dine and be entertained.”

Smith said Cordish had worked on similar projects in St. Louis and Philadelphia.

“It’s something that we’ve found as a sweet spot and works well not only for us but for the teams,” he said. “It has been a long journey to get through a pandemic.

“But we haven’t taken our foot off the accelerator.”

This story was updated at 5 p.m. to correct Zed Smith’s name.