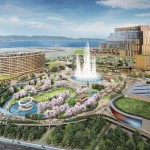 The Osaka Prefecture government on Tuesday released details of the winning Request for Proposal (RFP) submission from consortium MGM Resorts International and Orix Corp, for a casino complex – or Integrated Resort (IR) – in this Japanese city.

The project (depicted in an artist rendering) is called “WOW beside Kansai and Osaka region”. The concept of development is described in the documents as: â€œThe city of water to connect people and things as a transport hubâ€.

The initial investment amount for the complex is confirmed to be JPY 1.08 trillion, or approximately US $ 9.7 billion, slightly above a previously mentioned figure. The complex, which will be located on Yumeshima Island in Osaka Bay, would provide employment for 15,000 people.

The consortium expects 20.5 million annual visits to the property: 14 million visits from domestic customers and 6.5 million visits from overseas people. Based on the casino entrance fees imposed on domestic players, the prefecture and city of Osaka would get a total of 33 billion yen per year, according to the forecast.

At the end of July, the Osaka authorities raised the likelihood of a first opening of the IR at some point from 2028 at the earliest, until 2030.