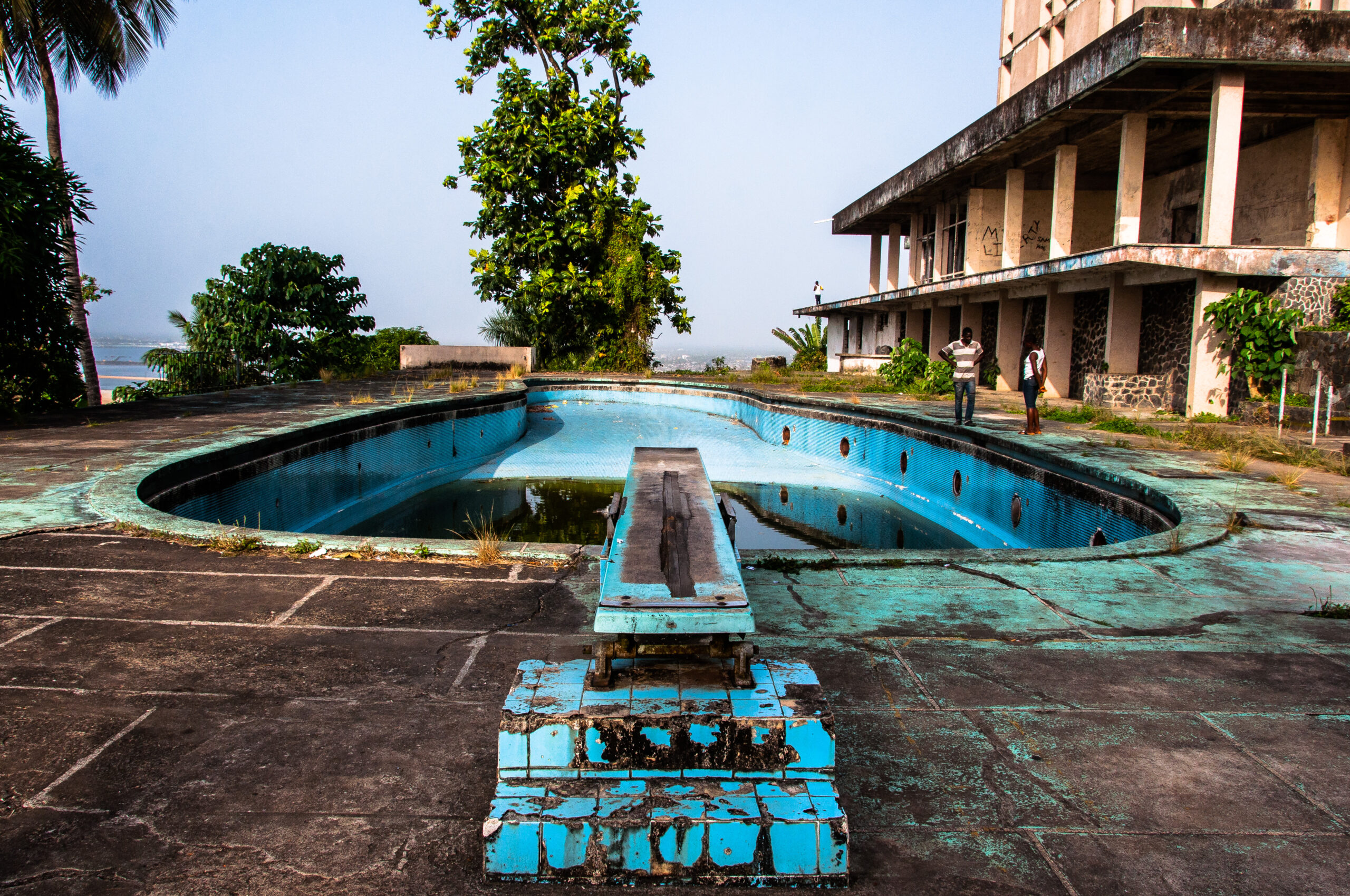 Overlooking Liberia’s ramshackle capital, Monrovia, stands a hotel that once symbolized an African dream, but now lies in ruins, the legacy of brutal conflict.

When it opened in 1960, the Ducor was one of Africa’s only five-star hotels with a nightclub and air-conditioned rooms, according to travel guides.

In its heyday, it hosted figures such as the former Ethiopian emperor Haile Selassie. Guests lounge by the pool, sip cocktails and watch the sun set over the Atlantic.

Today, little Monrovia bears the visible scars of war, but the rotting hulk of the Ducor is a reminder of the conflict that killed more than 250,000 people.

The hotel is in limbo, and even who owns it seems unclear.

The ruin, atop one of the tallest hills in the city, overlooks downtown Monrovia and the densely populated slum of West Point.

The former hotel’s rooms have been stripped bare, the moldy walls are riddled with bullet and shell holes, and the grounds have become a haunt for drug addicts.

“It makes everyone sad,” said Ambrose Yebea, a retired Tourism Ministry official who previously offered tours of the hotel.

The Liberian government once planned to restore the hotel to its former glory with the help of former Libyan leader Muammar Gaddafi.

But there has been no progress since his fall in 2011, and time keeps ticking away at Ducor.

There were few hotels in Monrovia in the 1950s, according to Yebea, prompting the construction of the Ducor in 1960 to accommodate traveling executives and government officials.

Designed by Israeli architect Moshe Mayer, in a modernist style, it has become one of the most luxurious hotels in Africa.

Golda Meir, then Israel’s foreign minister, who later became prime minister, attended its opening ceremony. Just like the leader of the independence of Guinea, Sékou Touré.

Photos of the hotel from the era show a gleaming building and guests taking it easy.

One of the lingering Ducor-related anecdotes, which AFP could not verify, claims that former Ugandan dictator Idi Amin swam in the pool with his gun.

Another guest, Ivory Coast’s first president, Félix Houphouët-Boigny, was so taken with the hotel that he arranged for Mayer to build a similar luxury establishment in Abidjan, which is still in operation. activity.

Many African leaders stayed at the Ducor in the 1960s and 1970s, including Selassie, Yebea said, with several booking rooms during the 1979 Organization of African Unity conference in Monrovia.

But by then the hotel was probably already in decline.

A 1975 World Bank report on Liberia describes the eight-story hotel as “dilapidated” and mentions government plans to renovate it.

Former Liberian warlord Charles Taylor positioned gunmen in the Ducor during the 2003 siege of Monrovia at the end of the war.

Later, squatters occupied the site. But President Ellen Johnson Sirleaf, who was elected in Liberia’s first post-war election, expelled them in 2007.

She initiated renovation plans. In 2011, his government sold Ducor to the Libyan African Investment Company, a subsidiary of the Libyan sovereign wealth fund.

According to a 2011 government statement, the hotel was to have 151 rooms, restaurants, a shopping mall, tennis court and casino, as well as bring jobs to the impoverished country.

But the project – which, along with another proposed rubber processing plant development, was valued at $65 million – then fell into another war.

Liberia severed ties with Gaddafi’s Libya in 2011 as the country descended into civil war. Renovation work has stopped.

“It was a big shock to us,” said Frank Williams, a laborer who said he was one of 150 people employed by the Libyan African Investment Company. “Today we are unemployed.”

The project has been stalled since then, and its future is unclear.

Neither the Liberian presidency, nor its tourism ministry, nor the Libyan African Investment Company responded to several requests for information.

The Libyan entity is subject to European Union sanctions because of its alleged close ties with the former Gaddafi regime.

In 2020, the United Nations Security Council also declared that the Libyan African Investment Company was in financial difficulty, incurring debt for the hotels under its management.

Some still hope to see the Ducor reborn. Yebea said it could attract tourists and create jobs. “Every Liberian sees it the same way. They want it to be renovated”. —AFP

As a snowstorm dawns, women risk being ‘evicted’ from their homes | Calavia-Robertson