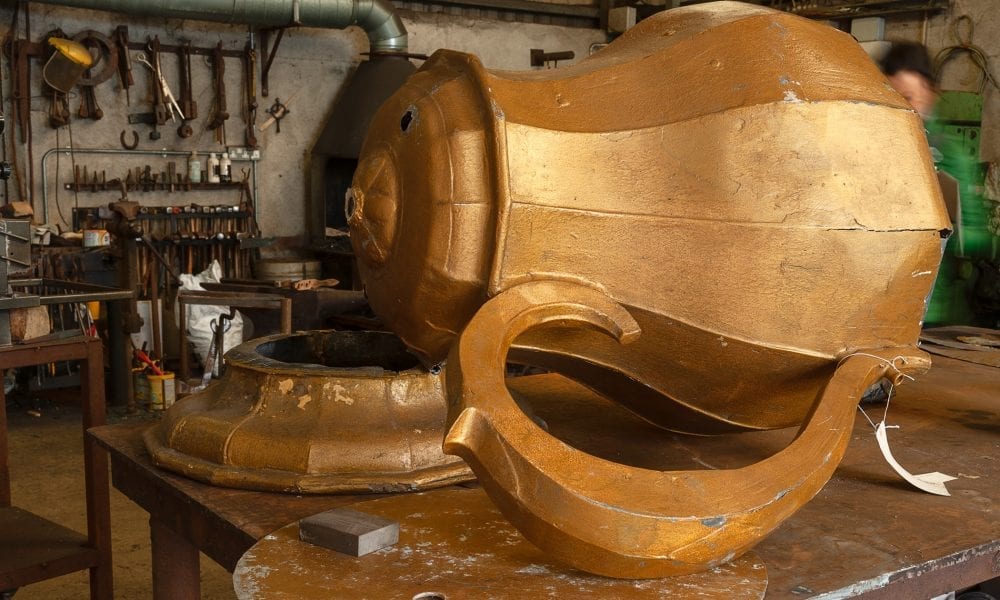 Armagh’s iconic golden teapot is to be erected in Upper English Street, it has been confirmed.

Proposals to move the artefact – which has been in storage at the County Armagh Museum for over 20 years – have now been put forward to Armagh City, Banbridge and Craigavon ​​Borough Council.

He is now set to make a very public appearance as a long-term resident of the Charelmont Arms Hotel.

The Golden Teapot will be erected on the first floor of the Turners Bar, which is part of the city’s hotel complex owned by the Forster family.

An application has been made on behalf of Armagh Townscape Heritage, which is currently overseeing the investment of over £6million in a range of property restorations in the town.

The golden teapot would be tied to its new location via steel rods and bolted to the building.

It comes after an earlier application to place it on a mid-terrace property in Russell Street was approved. This property was Wrights Interiors and Coffee Shop.

Armagh I first revealed the teapot’s return intentions in March 2019.

Roberta Wright had applied for a classified building permit and planning permission for the erection of the teapot outside its popular premises.

Approval was granted in March the following year, but the gilded teapot, which underwent extensive restoration work with gold leaf gilding, never appeared on Russell Street.

Now, however, it looks like Upper English Street will be the new location.

The golden teapot was created by James Irwin in 1870 who used it to attract customers to his family grocery store and cafe on Scotch Street. A newly established firm of plumbers from Armagh, Donnelly and Sommerville, were commissioned to manufacture the gigantic teapot and much of the work appears to have been carried out by James Robinson. Robinson was perfectly suited to the job of cutting and painstakingly soldering the zinc metal plates that make up the teapot as he was the “waterman” to the city commissioners and skilled in metalworking.

The sign hung on Irwin’s premises in Scotch Street for many decades, where the spout proudly blew steam to draw customers to its store and the City Bakery Café which thrived on the first floor.

It remained there for more than a century until it was unfortunately dismantled by an articulated truck in the 1990s.

In its dismantled form it was donated to the County Armagh Museum and carefully preserved in the museum’s air-conditioned stores.

Work, alongside interested individuals and local schools, has been carried out to repair the prized piece and this is now complete.

If the bid to place the teapot at this new location is approved – after being publicly announced this week – then the people of Armagh could get their first glimpse of the golden teapot in decades before the end of this year!