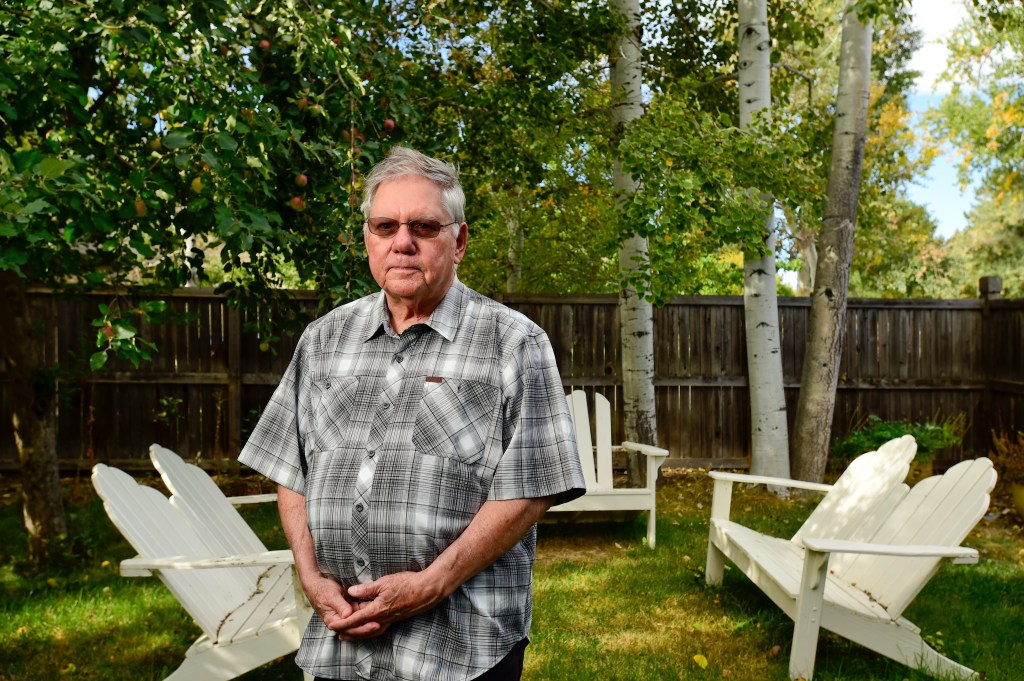 Charlie Pellerin looked out exactly a year ago today to see a column of thick black smoke spread across the sky and roll down a hill just west of his house.

Pellerin and his wife, Junko Yokota-Pellerin, were at their home on Foothills Ranch Drive on the afternoon of October 17, 2020, when they received a reverse 911 call telling them to evacuate.

Pellerin and his wife fled without seizing any of their property. They left behind models of missions that Pellerin had carried out during his three decades of work at NASA; photos and furniture dating from the childhood of the two couples, all overcome by the flames.

The wildfire, which broke out this Saturday near the Cal-Wood Education Center in Jamestown, would be named the Calwood Fire. It burned about 10,106 acres until containment on November 14, making it the largest wildfire in Boulder County history. The forest fire damaged 27 properties and destroyed 20 houses; among them was the Pellerin house. The fire reduced the couple’s home from about 18 to a 3-foot gray rubble heap.

Sitting on the back porch of his temporary home in Lafayette on a recent Thursday morning, Pellerin recalled the day he and his wife evacuated, leaving their home and everything in it. As Sunday marks the first year since the fire blazed a destructive path in Boulder County, those who lost their homes remembered the day their lives changed dramatically. Going forward, they asked the county to prepare for other disasters.

â€œThis will be the new normal,â€ Pellerin said. â€œYou can’t do anything about it except make the structure defensible. There are going to be more forest fires like this which are going to be hailstones of embers. “

For Pellerins’ neighbor Courtney Walsh, that warm, windy fall day was meant to be a relaxing Saturday with her family.

That afternoon, Walsh and her husband, Todd, and their two children, Taylor, then 10, and Wyatt, then 7, were having lunch in downtown Boulder.

A friend who was in North Boulder texted them just before 1 p.m. to tell them he saw a large plume of smoke near the area where their house was located on Foothills Ranch Drive – a street just off west of US 36, near Nelson Road.

Shortly after their friend’s warning, as the family made their way to their house, Courtney Walsh said the Boulder Emergency Management Office texted them to evacuate.

â€œWhen we were driving, I turned to my kids and said, ‘This is a fire drill, a real fire drill,â€ Walsh said. â€œThey were a little scared, but they kind of had marching orders. “

Before the Calwood fire, the family had already experienced falling ash and smoke from the Cameron Peak fire, which was burning in Larimer and Jackson counties and would become the largest wildfire in history state, burning 208,913 acres, the Denver Post reported. .

â€œIt was definitely very disturbing, so it wasn’t too shocking that we were dealing with more fires where we lived,â€ Walsh said. â€œIt was obviously a shock (albeit) to be evacuated. We had lived at Foothills Ranch for six years and were never evacuated.

Upon arriving home, the family spent about 15 to 20 minutes getting their two dogs, Cooper and Railay, and their daughter’s two rabbits, Cookie and Oreo, into the car. Walsh ripped pictures from the walls, while his children packed their suitcases.

â€œI also grabbed a bag of clothesâ€¦ but I didn’t think I would ever be there again,â€ Walsh said.

At the time, Walsh said his parents were living with them temporarily, as they were between the sale and moving into a new home. This meant that everything from Walsh’s childhood home was also inside their Foothills Ranch home.

After leaving their home, the family first went to a friend’s house in Boulder to wait for more information. That evening, they checked into the St. Julien Hotel & Spa, which allowed evacuees to stay there with their pets. The family already had reservations there as they planned to celebrate Walsh’s birthday later in the month with a stay.

At the hotel, the family scoured the internet for updates. They checked local news sites and monitored social media. Walsh said around 6 p.m. they came across a National Weather Service photo. It was their home. When she zoomed in, she could see the roof was on fire.

Walsh said it was about two days later when the Office of Emergency Management contacted them to let them know their home was a total loss.

Pellerin and his wife were also evacuated to a hotel in Boulder. Like the Walsh family, they were looking for information about what was going on in their home. Pellerin said his phone, which allowed him to monitor solar panels in his home, showed him the panels were dead around 4 p.m. He said he assumed the heat had destroyed them. Then, around 11 p.m., a friend contacted Pellerin to tell him that he had seen the couple’s house on fire.

The Walsh family now live in a rental house in Boulder, but for months they’ve drifted from Chautauqua cabins to hotel rooms and back again.

The coronavirus pandemic has added layers of hardship for the Walsh family.

â€œYou can’t see your friends. You can’t kiss your friends – it only makes something like that worse, “Walsh said,” and we couldn’t really live with other friends because of COVID. “

Pellerin and his wife faced a similar ordeal. After evacuating to a hotel room in Boulder, they moved to a neighborhood in Arvada, before moving to a rental house in Lafayette because they wanted to be closer to Boulder. They will be moving again this month to a rental in Boulder.

Pellerin has a picture of what Foothills Ranch Drive looked like before it was destroyed by fire. The house faced east and its multiple terraces offered a chance to take advantage of the surrounding open space.

â€œWe fell in love (with this house) the minute we saw it,â€ Pellerin said. â€œIt was love at first sight. We moved into this house in the spring of 2002, and fire was not a consideration.

The year Pellerin and his wife moved in, Pellerin worried about the drought. He cleared a perimeter of about 50 feet of grass and low tree branches around his house. Two firewalls, a clearing created to remove flammable objects, were also in place. But, he said, mitigation efforts today need to consider more than vegetation. The Calwood fire, he said, was not a typical ground fire.

â€œIt was a wall of embers,â€ Pellerin said. â€œIt’s the same problem we had in California. This is because when we get this combination of extremely combustible materials and high winds, it cannot be stopped. “

Pellerin and his wife plan to return to Foothills Ranch Drive. They are working to rebuild a fire-resistant house made of rocks and cement siding, with steel bridges. Pellerin hopes the house will be ready to move in in about a year.

Walsh said her family were doing their best to move forward, but continued to deal with the tragedy and navigate through insurance deadlines and questions about their next destination.

During this time, her children have been grieving. His son recently showed him a drawing he made of a house on fire. Her daughter is very minimalist with her things and makes sure to donate anything unnecessary, keeping only six pieces of clothing in her closet.

What Walsh wants, because today marks a year since the tragedy, are more measures to protect people from wildfires.

â€œIt’s not going to get better,â€ Walsh said. “There are going to be more fires as the climate warms.”

Walsh said more mitigation effort and resources, training and better wages provided to firefighters would be a start. She praised the work of U.S. Representative Joe Neguse to establish a 21st Century Civilian Conservation Corps to help alleviate the wildfire danger and provide housing and mental health resources for federal wildland firefighters.

She also asked homeowners to take a closer look at their insurance policies and take the time to understand what their fire insurance policy looks like and what it covers. Walsh advised those who live in the mountains or in areas vulnerable to fire to create an escape plan at a time when they are calmly able to think about what things they would like to take with them. And, she said, people need to take evacuation orders seriously.

Something that comforted Walsh in the aftermath of the tragedy was Chautauqua’s â€œArt in the Parkâ€ project, which reused burnt-to-fire trees into benches. The benches were decorated by artists and auctioned off to raise funds for Chautauqua’s forest fire prevention efforts.

â€œFor us it was a way to heal,â€ Walsh said. â€œYou see art made from burnt firewood – it’s just nice. Definitely tone down and remember. It’s easy to forget things, especially if it hasn’t happened to you, but it’s serious. It is truly devastating.