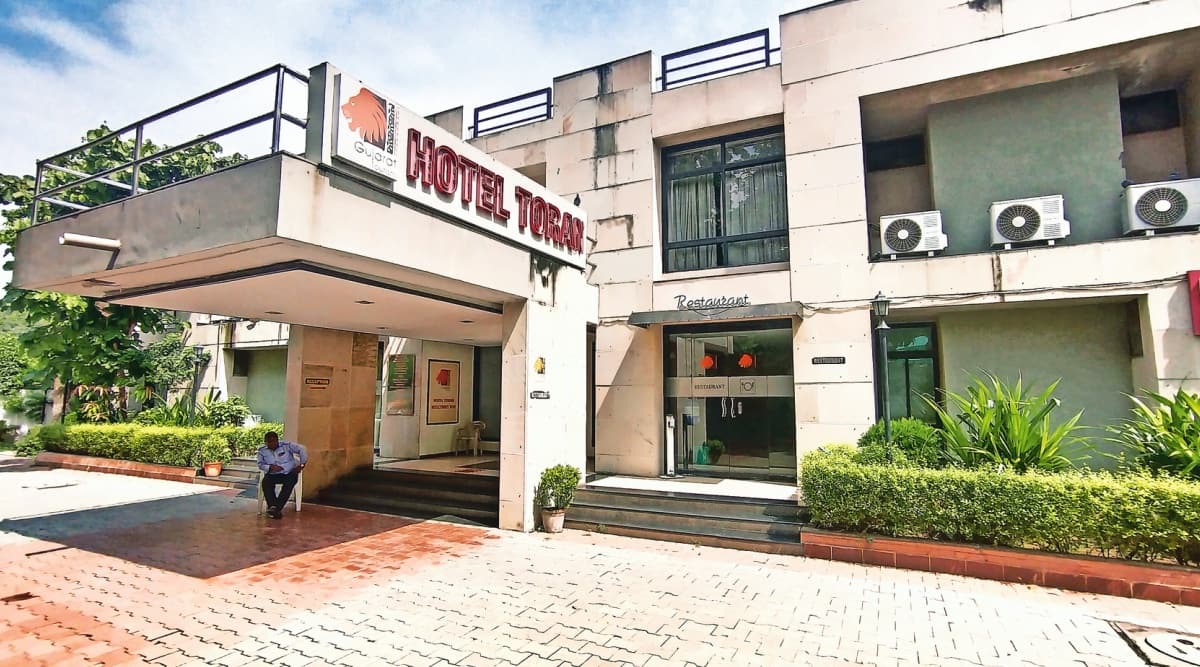 It was lunchtime rush hour on a Wednesday afternoon. The basic dining room at the Toran Hotel, opposite the Gandhi Ashram in Ahmedabad, consists of six six-seater tables and three four-seater tables.

Three tourists from Guwahati sat at one of three four-seater tables. “We had come to the ashram and stopped here for lunch,” said the tourists from Assam. Soon four policemen walk in and without looking at the menu order two Gujarati and two Punjabi thalis. “It’s almost a fixed routine for us. On days when we can’t get home in time for lunch, we meet here,” said one of four police officers from the city’s police commissioner’s office. from Ahmedabad.

For more than a decade, Hotel Toran served as a quick lunch stop for tourists, especially those visiting the Ashram.

The hotel, which began its innings as a guesthouse in 1971, will likely be the first “incongruous building” to be razed as part of the Gandhi Ashram and Precinct Development Project, ending its mutually beneficial association with the ‘Ashram.

“As it is government property, it will be the first to fall,” a senior official told the Indian Express.

According to the state government’s affidavit before the High Court of Gujarat, 48 buildings on the 55-acre area to be redeveloped will be preserved. Thus, nearly 129 of the approximately 177 buildings could be demolished.

The foundation stone of the old ‘Gandhi Ashram Guest House’ was laid in March 1969 by Ravishankar Vyas, one of the earliest and closest associates of Mahatma Gandhi and Sardar Vallabhbhai Patel, and who had also joined Gandhi for the Marche Dandi in 1930. The guesthouse was inaugurated by Sarojini Mahishi, then Union Minister of State for Tourism and Civil Aviation, in July 1971.

With a few accommodation rooms and rudimentary facilities, the guest house was renovated and transformed into a hotel comprising a ground floor and an upper floor in 2012. The renovated premises, named “Hotel Toran”, were inaugurated by the then Minister of State, Jaynarayan Vyas. .

The hotel is part of a chain of hotels and resorts managed by Gujarat Tourism through the Tourism Corporation of Gujarat Ltd (TCGL). There are six Toran hotels across the state including Saputara, Lakhpat and Dwarka.

Manager DP Sharma, who started as a cook on the premises, said there has been virtually no change, except in prices, in the decade since the hotel opened.

The food menu also remained unchanged with a full Gujarati thali lunch at less than Rs 140; ten years ago it cost between 70 and 80 rupees, Sharma said.

According to several state tourism department officials, the majority of stay bookings received by the hotel are from tourists from West Bengal and southern Indian states. Most of these tourists are usually elderly people.

“As the Ashram is a tourist hub, especially for those traveling from out of state, the location of the hotel is extremely convenient. Just cross the road to visit the Ashram. Secondly, we also noticed that since most of these tourists are seniors, security as well as affordability of rooms also remain unique selling points. While in terms of staycation bookings we typically see peak season between September and February, restaurant lunch dates do however see a steady stream of visitors,” one of the officials said.

With 11 rooms, one suite and the other luxury rooms, a conference room, an executive room and the restaurant with kitchen, the hotel remains largely utilitarian but seems to remain oblivious to the potential for opulence and luxury that the hotel offers. prime location.

“The hotel is also a convenient strategic point for meetings of government officials. For any VIP guest visiting the Ashram, the hotel serves as a meeting point and in case of visits from the PM and other foreign dignitaries, police and security briefings are held here,” another official said. . Such was the case when then-US President Donald Trump visited with Prime Minister Narendra Modi in February 2020. For a week prior to the visit, the hotel had seen a steady influx of security reconnaissance, from police briefings, state and district officials visiting and holding meetings. coordinate and plan the visit. Notably, the Ahmedabad district collector’s office is only about 500 meters from the hotel.

Sharma said the hotel restaurant usually fills up on weekends when the ashram’s attendance also increases. “Most of the out-of-state tourists prefer the ‘a la carte’ menu as they don’t like the sweetness of Gujarati food. Locals, however, prefer Gujarati thali,” Sharma said.