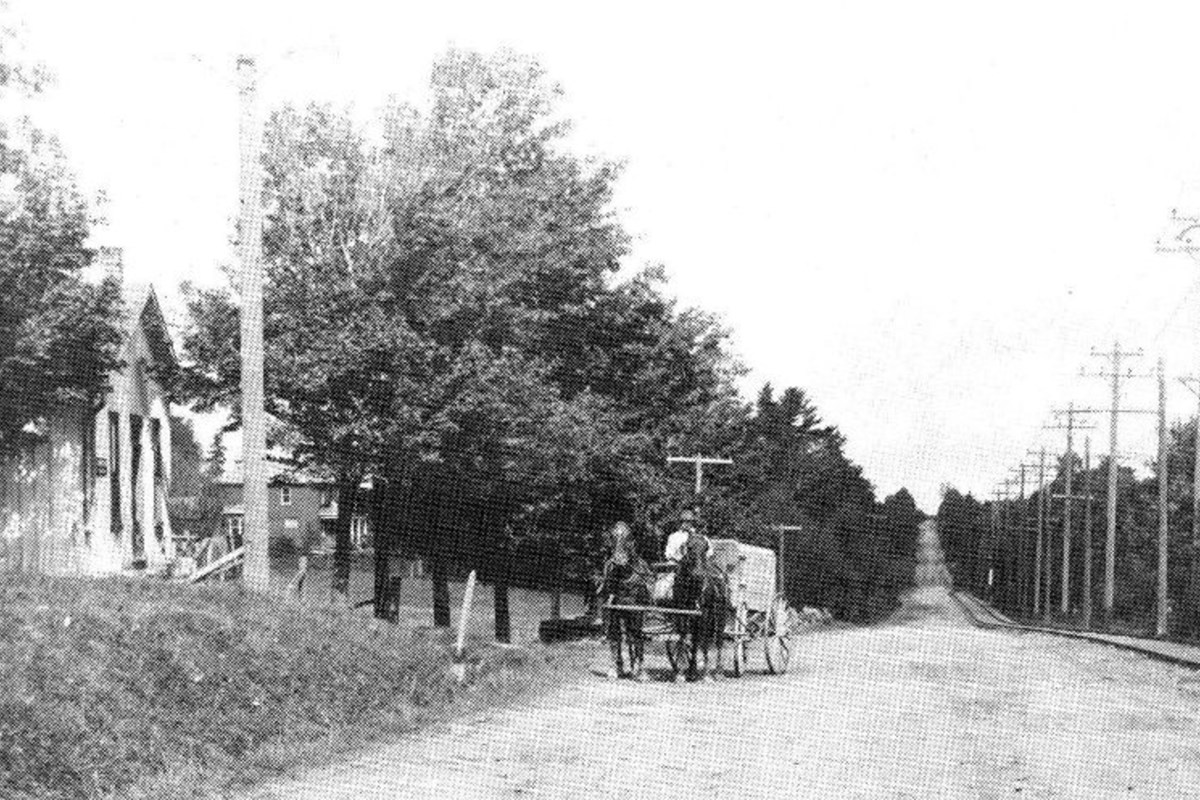 This Weekend on Newmarket Today we take a look at the first hotel in the Newmarket area, located in what was once the first permanent white settlement in King Township, established in the early 19th century in Armitage on the west side from Yonge Street, just southwest of the Town of Newmarket and bordering the Town of Aurora at the Saint John Side Road. Armitage would eventually be merged with Newmarket when its boundaries were expanded.

Mr. Amos Armitage, whose hamlet was named, was part of the Quaker migration spawned by Mr. Timothy Rogers along Yonge Street. Mr. Amos Armitage was one of the first Quaker settlers, his concession was located on lot 92 Yonge Street. His farm would remain in the family for a century until it was purchased by a Mr. Roy Shaw. In addition to clearing land, Amos Armitage established a carpentry workshop where he made many of the wooden items necessary for pioneer life. At the same time, he was involved in the construction of several of the first buildings in the center of the mill, which would become Newmarket.

Union School Section # 3, Armitage was originally built in 1850, a frame and brick structure. It was located on the original Clubine family farm, Lot 88 on the east side of Yonge Street, where Nature’s Emporium Plaza is now located. When I was a child there was an orchard there and the remains of the â€œbucket of bloodâ€. The school was rebuilt in 1914 and reincarnated on Savage Road, not far from the original school. In the photos section of this article, I have included photos of the school, the Hicksite cemetery, and the location of the post office before it was taken down. I have also included a map of the settlement land grants. Unfortunately, I only have one photo of Gambles Inn to offer.

From 1800 to 1811, only one inn permit had been issued in the whole of Whitchurch Township, and it was to a Mr. Nathaniel Gamble who had settled on lot # 89 on the east side of Yonge Street just north of the Mulock property in the southwest corner. It was also one of the first inns in all of York Region. You will recall from a previous article that there was a Quaker meeting house called Hicksite, the graveyard that remains hidden behind the Stronach Women’s Shelter.

Mr. Gamble’s Inn was the main stopover for settlers who migrated to the lots along Yonge Street. Often their camp last night was in the woods of Gamble, just south of what has become Sir William Mulock’s farm, where a trail ran west of Yonge Street.

In the early 1800s, the Inn was considered an extremely important structure, often ranking ahead of schools, churches, and shops. It was the local entertainment center, the site of public meetings, trials and the first religious services. The village inn was literally the center of any established community.

Nathaniel Gamble was one of the pioneers of Newmarket in the early 1800s, his name is found in our early recordings, associated with many social and political initiatives. Records indicate that Mr. Gamble was born in 1756 and immigrated to Upper Canada in 1802 with a group of Quakers from Vermont under the auspices of Mr. Timothy Rogers. Mr. Gamble occupied 200 acres of land on which he would establish a farm and build a hotel called “Gamble’s Inn.” He married a Mrs. Susannah Mercer in 1803 and had eight children.

The hostel is described as having been a two-story planked structure containing a dozen rooms and a large bar (a must-see for the time). Since this was the only hotel / hostel in the area, you can imagine how popular the establishment would become. The existence of the bar alone would guarantee its economic place in the flourishing local economy.

Tired travelers heading north along Yonge Street between York (Toronto) and Holland Landing’s Lake Simcoe Harbor (see my articles on the stagecoach line that began in late 1820) usually stopped here for the night or at least for a drink or two. One of the Inn’s claims to fame was the story of the great Arctic explorer, Sir John Franklin, who stayed here at the Inn on more than one occasion.

As noted above, Gable’s Inn was quickly becoming the social hub of the community, if not of King Township. We know that the first town hall of the Township of King took place at the Inn on March 6, 1809, and that they will continue to host assemblies until 1839.

The Western Light Lodge, the first organized Masonic Lodge north of Toronto, established in 1817, held its first meeting “at the house of Mr. Nathaniel Gamble,” located on the first concession in King Township, about three miles from Newmarket. It seems that the hostel has been a common place for local gatherings of all kinds for years.

There is a story of Gamble’s Inn playing a part in the story of Mr. William Lyon Mackenzie, who is said to have visited the Inn while attempting to escape authorities after 1837 and the rebellion, while in leak. Maybe he stopped by for a drink or two.

Did you know that Mulock Drive was originally known as Gamble Road, such was the importance of Mr. Gamble and Gamble’s Inn locally?

Nathaniel’s son, Nathaniel Allen would continue to run the Inn for several years after his father’s death. Although we do not know anything about the disappearance of the inn, we do know that by 1850 it had disappeared from the list of hotels and inns in the area.

Lots on Eagle Street, but there doesn’t appear to be a matching gravestone to see.

And so ends my short history of Armitage and the local establishment called Gamble’s Inn. Armitage, as a separate community fell due to the expansion of Newmarket’s borders in the 1970s, another unique community relegated to history. Explore the old Quaker Cemetery behind the Stronach Women’s Shelter to take a little trip down memory lane. Sir William Mulock gave his address as Armitage, not Newmarket.

See you all here next weekend. Be well.

Newmarket resident Richard MacLeod the history dog â€‹â€‹has been a local historian for over 40 years. He writes a weekly article on the history of our city in partnership with Newmarket Today, organizes local heritage lectures and walking tours, and conducts local oral history interviews.