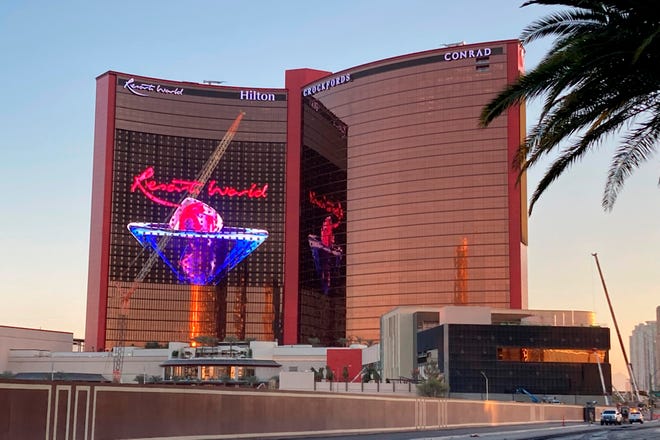 Resorts World Las Vegas, a $ 4.3 billion resort that opened to the public on Thursday, allows card players to bet with in-house tokens implanted with sensors at tables that accept cashless transactions and track every bet , split, double-down and side bet.

“It’s all RFID,” said casino operations manager Rick Hutchins, referring to the RFID technology built into the first new Las Vegas resort to open since 2010. “The table knows exactly what I bet.”

Cashless technology has been modernized in recent years in existing properties. It was incorporated into Resorts World from the start, executives told reporters during a preview tour on Tuesday.

“We are really excited,” said property president Scott Sibella. “It’s been a decade since a property like this opened for business. We kind of broke the mold.”

The newest casino on the Strip

The Cosmopolitan of Las Vegas debuted in 2010. Among the other major resorts on the Strip, the Bellagio opened in 1998, Wynn Las Vegas in 2005, and Wynn’s Encore in 2008. The City Center multi-resort complex of MGM Resorts opened in 2009 at an overall cost of $ 1.6 billion.

Resorts World is expected to boost a local economy dependent on tourism, battered by the coronavirus pandemic, but which has rebounded from the lifting of closures imposed in March 2020 and the easing of travel restrictions.

Customers vaccinated against COVID-19 do not have to wear masks, in accordance with local and state regulations. The employees of many companies still do.

“Resorts World is certainly a contributing factor to the expectation of improved economic conditions in the second half of 2021,” said Jeremy Aguero, director of Applied Analysis, based in Las Vegas.

At a blackjack table, Hutchins said players can still use cash. But those with member rewards accounts and wireless wallets will be able to scan their phones with the dealer instead of visiting the casino cages.

“I have $ 25 there, the RFID chip knows it and the (table) antenna below. And if I bet these side bets, he knows it too, ”explained Hutchins. “I can cash in at the table, I can walk with my chips, I can get a (paper entry and exit ticket) here, or I can put it back on my (cell phone) wallet.” “

Slot machine players who have the app can also scan their mobile phone’s QR codes to play.

A player’s stake may be spent throughout the resort, with the exception of sports betting, which is handled under a different regulatory process by the Nevada Gaming Control Board.

The huge, high-ceilinged main gaming floor is longer than two football fields and dotted with slot machines. It is the centerpiece of the game.

A hall leading to the automatic parking lot displays some of the fancifully colored Rolls Royce sedans by collector Michael Fux.

The world of seaside resorts:The first new Las Vegas Strip casino hotel in a decade is now open. Look inside.

Las Vegas buffets:Self-service is back, but the “buffet capital” is not back to normal

Parts of the complex are still under construction, including developer Elon Musk’s Tesla vehicle underground transportation system that will connect to the nearby Las Vegas Convention Center.

For now, the daytime view beyond the resort’s infinity pool is of tractors, trucks, and landscape leveling operations. At night, the view will be the lights of the Strip.

Malaysia-based Genting Group, an operator of resorts and casinos around the world, purchased the large 88-acre (35.6 hectare) property in 2013 from Las Vegas-based Boyd Gaming for $ 350 million. . Construction began in May 2015.

The site was once the Stardust, an iconic Las Vegas landmark that opened in 1958 as the world’s largest hotel, with 1,500 rooms. Its 32-story tower imploded in 2007.

The smoky, mirror-walled casino at The Stardust was a park for Rat Pack members, including Frank Sinatra. Its showroom hosted comedians Don Rickles, Tim Conway and Phyllis Diller; groups like The Temptations and Four Tops; and the duo Steve Lawrence and Eydie Gorme. Wayne Newton was the headliner of the 920-seat Stardust Theater before the casino closed in 2006.

What kind of entertainment can I find at Resorts World?

Celine Dion will open the new 4,700-seat theater at Resorts World on November 5, still under construction, said John Nelson, senior vice president of AEG Presents, in charge of the venue. The residences of Carrie Underwood, Katy Perry and Luke Bryan will follow.

DJs, including Zedd and Tiësto, will star at the Zouk nightclub with a capacity of 2,000 people and the AYU outdoor nightclub.

In hotels, amenities shift from the 1,774-room Las Vegas Hilton to Resorts World to the 1,496-room Conrad Las Vegas and the exclusive 236-suite Crockfords, where CEO Whitney Mulaj highlighted her connection to luxury brand LXR Hotels.

Each hotel has a separate lobby.

“We use 100% ticketless technology,” said Prescott Yee, front office manager at Resorts World. When guests arrive at valet parking, they are given a digital QR code allowing them to bypass check-in and go straight to their room.

“No more tickets. No more paper, ”Yee said. “It’s the essence of the whole customer experience. “

The design shows the growing importance of the rental of venues, conference space, entertainment, dining and shopping for a tourist destination where Aguero said non-gaming revenue in fiscal year 2019-2020 accounted for over 70% of income. Twenty years ago, gambling represented 60% of income.

How technology impacts the experience

Hutchins, at the blackjack table, said anything a guest does will be bundled together in the Resorts World mobile app. Wireless connectivity and a customer’s cell phone also eliminate the need for a physical membership reward card, he said.

“The things that you do within the property, we are going to be able to recognize you, reward you for it or entice you,” said the casino’s chief operating officer.

“If you’ve eaten at the steakhouse, you might want dessert at Wally’s later,” Hutchins said, referring to one of the resort’s nearly 40 eateries and eateries. “We will be able to digitally serve a badge that says. “Hey, try some dessert on us. “

Lih Pao will build a new complex, while he finishes hotel