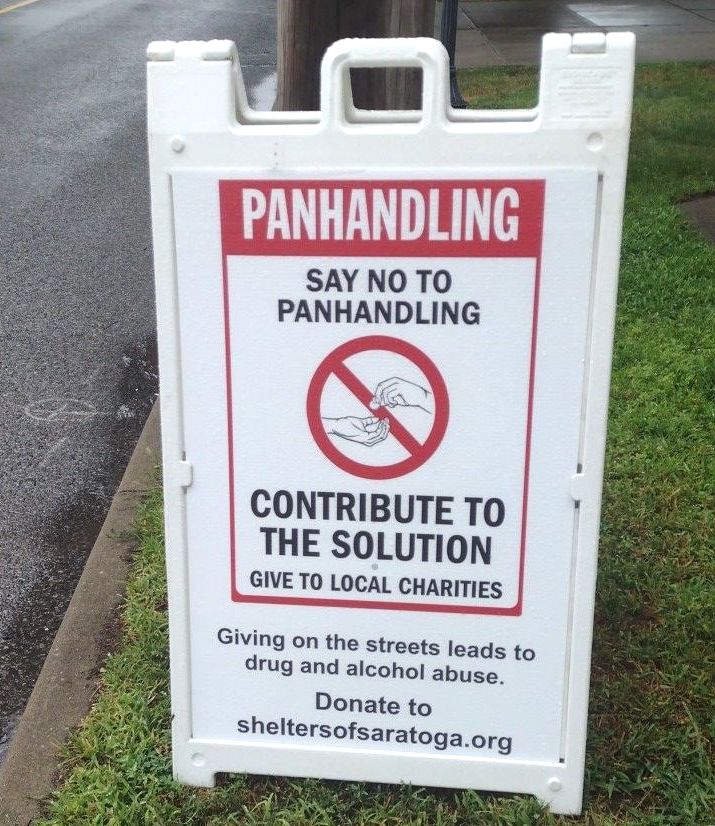 SARATOGA SPRINGS – Fed up with beggars hanging across the street at Stewart’s Shop on South Broadway, the owner of Stay Saratoga has put up a sandwich board outside his hotel asking people to stop donating and donate to Shelters of Saratoga, which provides programs for the homeless.

“Beggars are scaring away hotel guests,” said owner Stephen Chindamo, who put up the sign. “It’s a scary situation because they’re harassing people. It’s intimidating and it devalues ​​ownership on that block.

The sign on the main artery of the city reads:

“Say no to begging
Contribute to the resolution
Donate to local charities
Giving on the street leads to drug and alcohol abuse.
Donate to sheltersofsaratoga.org »

The sign caused another problem, however. He forced Shelters of Saratoga to send a notice to his supporters telling them that the organization is not the source of the sign and does not agree with its language.

“We have nothing to do with this sign,” Shelters of Saratoga executive director Duane Vaughn said. “I went to speak to the owner and told him I didn’t want our name on the sign because it’s not accurate. Homelessness does not cause alcoholism or drug addiction. … The sign is not ours. It is not factual and we do not tolerate it. But we can’t control what other people say or do.”

Chindamo played down any disagreement between him and Vaughn, saying it’s purely based on semantics. He also said he was forced to turn off the sign as a last resort as he went to Stewart’s house to complain and nothing was done.

“It’s a simple fix,” he said. “Stewart’s can tell them not to trespass on their property. I asked them to do it several times. I called head office and filed a complaint with consumer services. They tell me they are going to do something, but nothing is done. I called the general manager there and nothing is done.

A spokeswoman for Stewart, however, said Stewart took care of it.

“We have a no-loitering policy and are working with local law enforcement to control begging,” Erica Komoroske said in an email to The Times Union. “We’ve even partnered with Saratoga Shelters through their Give for Change program which offers coffee pouches with a QR code in each of our Saratoga County stores to educate residents and visitors about poverty and homelessness in the region. The campaign provides critical financial support for solution-based services that help end the cycle of homelessness. »

But that didn’t stop beggars from showing up at Stewart’s house every afternoon, Chindamo said. Furthermore, the hotelier claims that the beggars are not homeless and suspects that they are using the money to buy drugs and alcohol. He says he saw two of the regulars going in and out of the houses and also saw one of Price Chopper’s men with “a whole basket full of booze”.

“McDonald’s had the same problem,” Chindamo said. “They removed their patio furniture and they don’t have the problem.”

He alleges that Stewart’s allows it because, he says, beggars spend their money at Stewart’s.

Chindamo said he also called City Hall and spoke with Mayor Ron Kim. On Monday, Kim said Chindamo wanted the city to put up similar signs. Kim said he wouldn’t for three reasons: it would send the wrong message about the city, begging is a right to free speech and the signs along the road are a traffic hazard.

Kim, however, said aggressive begging should be dealt with. On Tuesday evening, the city council will hold a public hearing to discuss an ordinance to tackle beggars who harass residents.

“We won’t put up signs, but we want to draw the line at aggressive begging,” Kim said. “It’s modeled on what Rochester has done and has already been reviewed (and upheld) by the (state) Court of Appeals.”

Vaughn agrees that the sign isn’t the best option. Moreover, he said that no one really knows how the money collected is spent.

“It could go to support a family, a hotel room, or food,” Vaughn said. “If people want to donate money, it’s a personal choice. We can’t tell them how to spend it.”