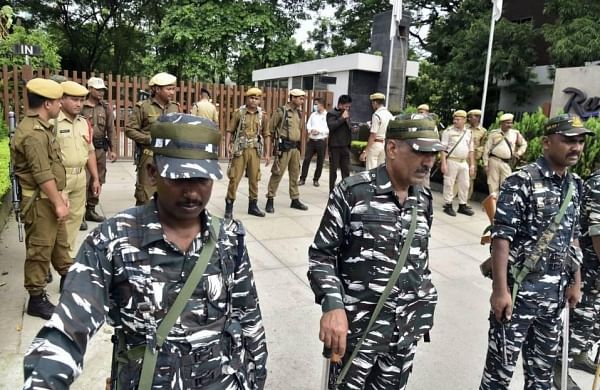 THANE: Shiv Sena MLA Pratap Sarnaik said on Wednesday that the party should reunite with the BJP, as the Maharashtra government led by Uddhav Thackeray faces a crisis following a revolt by a section of Sena MPs led by Eknath Shinde.

Sarnaik, the MP for the Ovala-Majiwada constituency of Thane, is facing an investigation by the Directorate of Law Enforcement in a money laundering case.

He had written a letter to Chief Minister and Sena Chairman Uddhav Thackeray last year, saying the party should team up with the BJP to rescue its leaders from central agency action.

Speaking to reporters on Wednesday, Sarnaik said: “I had initially floated the idea that the Shiv Sena should go with the BJP.

Sarnaik had in his letter to the CM last year said that although the BJP and the Shiv Sena are no longer allies, their leaders have a good relationship and the Sena should take advantage of that.

Notably, the ED had recently seized assets worth more than Rs 11 crore from Sarnaik in the money laundering case linked to the National Spot Exchange Limited (NSEL).

A number of politicians and ministers of the Maha Vikas Aghadi (MVA) government, which comprises the Shiv Sena, NCP and Congress, in the state have faced DE actions in the recent past.

On Wednesday morning, a group of 40 MPs from Maharashtra, led by dissident leader Eknath Shinde, arrived in Guwahati and they were taken to a luxury hotel on the outskirts of the city under tight security.

Earlier, the MPs were taken to Surat in Gujarat from Mumbai on Tuesday, and the decision to transfer them to Guwahati in Assam was taken for security reasons, according to a BJP source.

The MPs were received at the airport by BJP MPs Pallab Lochan Das and Sushanta Borgohain Shinde, who at first refused to speak to media waiting outside the airport, later said he had “the support of 40 deputies”.

The exact number of Shiv Sena rebel MPs traveling on the flight could not be confirmed, but the flight had 89 passengers, including crew on board, sources said.

The MPs arrived here from Surat and were taken to the hotel in three Assam State Transport Corporation buses.

Earlier, Shiv Sena MP Sanjay Raut claimed that 14-15 Sena MPs including some ministers were with Shinde in Surat city, Gujarat.

However, another party leader said the number could be 23.

Speculation is rife that Chief Minister Himanta Biswa Sarma was likely to meet the MPs during the day, although the BJP party or his office have yet to confirm the meeting.

Tight security was imposed with a huge group of police stationed in and around the hotel.

The MPs were flown to Surat from Mumbai on Tuesday and the decision to transfer them to Guwahati was taken for security reasons, according to a BJP source.

This may be the first time MPs from a western Indian state have been taken to a northeastern state after their rebellion against the party leadership.

The government led by Shiv Sena in Maharashtra is facing a crisis following the revolt of a section of its MP led by Shinde.