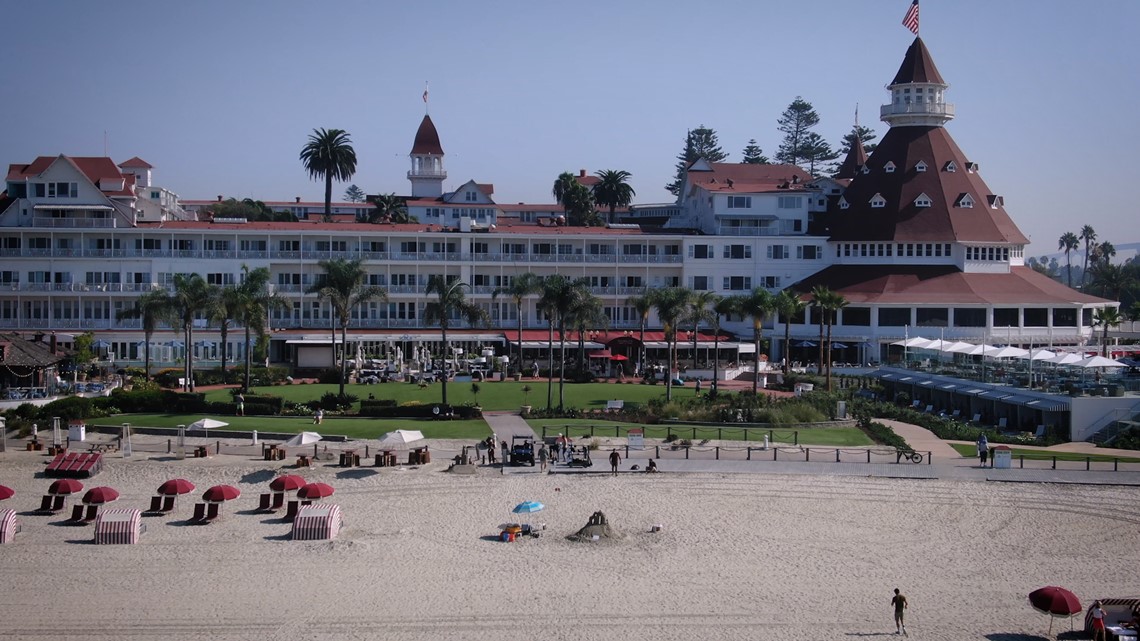 Marylin Monroe isn’t the only celebrity to have stayed at the famed San Diego County hotel, which has become a movie star itself.

CORONADO, CA – Hotel Del Coronado is easily visible on the Southern California coast. It’s the shining star of San Diego Bay and its architecture is what made the resort town of Coronado famous, but when Marylin Monroe stayed there in 1959, Hollywood led us to believe that this beautiful California building was the Seminole Ritz in Miami, Florida.

It might sound like a harmless bit of movie magic, but Heritage Hotel manager Gina Petrone says it didn’t sit well with some Floridians.

“The mayor of Miami wasn’t very happy that a Southern California resort was chosen to represent Florida,” she said.

Affectionately known as “The Del”, the hotel is the second largest wooden structure in the world and one of the last remaining Victorian resorts. It is also the filming location of the romantic comedy Some like it hot.

“These are two men who witnessed the St. Valentine’s Day Massacre hiding from the crowd,” Petrone says.

These two men are played by actors Tony Curtis and Jack Lemmon, who end up dressing up as women and joining a traveling band with Marylin Monroe.

“The gangsters follow them to the hotel and that’s where all the chaos ensues,” says Petrone.

She knows all about the chaos of the movie. Petrone curated The Del’s museum and researched the hotel’s extensive cinematic history. One of her favorite scenes was with Tony Curtis on the 4th floor balcony.

“He sparkles on the front of ‘The Del’, hops on a bike and takes off.”

Due to its proximity to Hollywood, “The Del” has been featured in more than a dozen movies and TV shows, but actors aren’t the only famous people to stay here. There is also a long list of dignitaries.

“Starting with President Benjamin Harrison in 1891. We’ve had 11 presidents [as guests] since then,” says Petrone.

Hotel Del opened in 1888 after just 11 months of construction. Its ornate wooden joinery and the installation of electricity made it the epitome of luxury, but at the time “The Del” was not just a resort. It was also a hunting lodge.

“The original floor was tiled, so at the end of the day the guests would post their catches on the tiled floor so people could watch the quails, the rabbits,” says Petrone.

Housekeeping frowns on the display of dead animals on the floor these days, but there’s still plenty of old-fashioned charm throughout the hotel, as well as old ghosts.

“Sometimes you’ll have the covers taken away, the pillow taken away, lots of lighting issues, the lights go on, the ceiling fans go on, the phone rings and nobody’s there,” Petrone says.

So far no Marylin Monroe ghost sightings have been reported, but you are welcome to take a tour with Gina and she will show you some of Marylin’s favorite spots around the hotel.

Las Vegas adviser: Work begins on a $750 million casino that’s long been out of order in Las Vegas