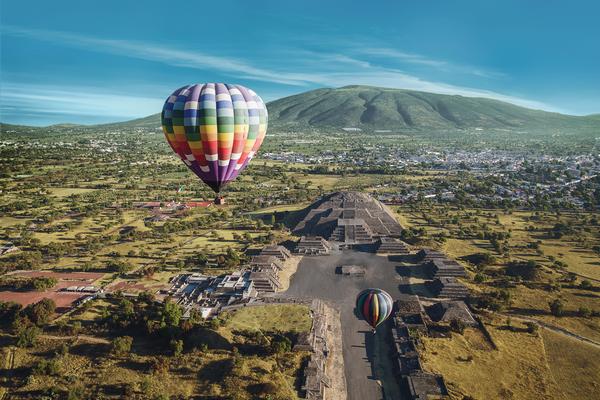 Christmas is one of Mexicans’ favorite seasons, and believe it or not, its magic is experienced very differently across the country. As Christmas approaches, Mexico has presents. You can choose Magic Towns (Pueblos Magicos) that look great for their events, atmosphere and craftsmanship, turning the Christmas season into an unforgettable experience for you and your family.

If you don’t know where to spend Christmas in Mexico, one of these landscapes and warm atmospheres is for you.

Tlalpujahua is one of the eight magic towns of the State of Michoacan and is located between mountains and forests 170 km from Mexico City. It is a charming town with a rich mining history and a great tradition of craftsmanship, among which the Christmas spheres stand out.

More than 30 years ago, Tlalpujahua became an important center for the production of blown glass Christmas balls, which is why many people visit to see the workshops where they are made and buy ornaments for their Christmas trees. . The Sphere Fair is held annually from October to December, making it ideal for sightseeing and soaking up the Christmas spirit.

– Visit the Santuario del Carmen and the first mining museum in Mexico in the old mine “Las Dos Estrellas”. If you love nature, you should walk through the forests of peaceful Campo del Gallo, and if you go to Tlalpujahua between November and March, don’t miss the opportunity to witness the migration of the monarch butterfly.

Just 10 km from the city center is Hacienda Cantalagua, inside an 18th century hacienda. The hotel has 125 suites and divides its rooms into 21st century rooms (with contemporary decor) and 18th century rooms (in colonial style). The hotel also has a golf course, an indoor swimming pool and a Mexican restaurant.

Tepotzotlan is located just outside of Mexico City, making it an accessible destination if you live in the capital. A special time to visit is during the Christmas season due to its famous Pastorelas which have been held for over 50 years.

Tepotzotlan is home to the former convent of San Francisco Javier, named a World Heritage Site by UNESCO. The complex consists of the National Museum of the Viceroyalty, the Temple of San Francisco with its beautiful baroque façade and the Convent Inn where the Pastorelas take place. The plays tell the classic story of little shepherds who travel to Bethlehem to meet the God Child, and on the way the greatest devil and his demons try to stop them, all mixing indigenous, Spanish and Mexican traditions.

– At the end of the Pastorela, taste a delicious punch, buñuelos and antojitos while mingling with the cast. During the day, stroll through the town enjoying its markets, craft shops and view of the 62-meter-high Sitio Aqueduct.

Near the center of Tepotzotlán is Finca Las Hortensias. What better way to spend the holidays than in an outdoor jacuzzi?

Bernal is a small Pueblo Mágico in Querétaro, in the heart of the state’s wine region. With only 4,000 inhabitants, it retains a traditional and intimate atmosphere to savor at Christmas.

When you arrive in Bernal, you will be impressed by the view of the Peña de Bernal, the third tallest monolith in the world with a height of 350 meters. It is possible to climb part of it and enjoy the scenery from the cliffs. The town has several craft shops and the Casa Museo del Dulce.

At Christmas, the tradition is to visit the Casa Tio Camilo hotel to see an extraordinary nativity scene with more than 60 handmade figurines and 70 other nativity scenes from countries such as Japan, Denmark and Peru. It is possible to take a guided tour of the exhibition with sound and light.

In addition to everything else, every year Finca Sala Vivé de Freixenet offers a Christmas concert and dinner at the beginning of December, where you can enjoy good music and a delicious dinner with local food and wine pairings. At the end, enjoy the party and dance with DJ.

El Cantar del Viento is a boutique hotel on the slopes of La Peña, so beautiful views are guaranteed. It has six bedrooms, and you can relax with your family in one of the hammocks on the terraces, enjoy the Spa or eat the famous Bernal gorditas.

Just 50 kilometers from Mexico City is the magical town of San Juan Teotihuacan, famous for its pyramids but with many other attractions to enjoy during Christmas.

The main attraction is the 2,000-year-old archaeological site of Teotihuacan, once the largest city in the Americas. The Pyramids of the Sun and the Moon are not to be missed, but few people know about the various ruins that remain in the city of San Juan. Visit the Purificación district, where you can see the remains of Yayahuala and Zacuala Palace, as well as other small remains.

In the center of the city are the former convent of San Juan Bautista, with a Baroque quarry facade, and the Templo de Nuestra Señora de la Purificación (Temple of Our Lady of Purification). If you are visiting on a Monday, don’t miss the tianguis (street market), where you can buy obsidian handicrafts and taste its rich barbecue, mixiotes and pancita. And the icing on the cake would be to fly over the ruins in a hot air balloon at sunrise!

– Only 10 kilometers away. away from San Juan is the town of Acolman, famous for two things: the old convent of San Agustin and the place where piñatas were invented. The monks of the convent created the first piñata in 1587 to represent the seven deadly sins and the temptations of evil. Each year, the piñata fair is held for several days with piñata contests, workshops that show how to make piñatas, dances and posadas. There’s no more Mexican Christmas party than this!

Very close to the Teotihuacan archaeological site and the city center, you will find the Quinto Sol hotel. This charming hotel has excellent staff who will treat you like royalty on the terrace and in the gardens. Visit the lounge bar with unique cocktails right by the pool, perfect for relaxing and sunbathing or toasting a Merry Christmas and a Happy New Year.

Tecate is a border town famous for the beer of the same name, but it’s also a charming place with history, culture and nature, with much more to offer, especially during the Christmas holidays.

Every December there is a “Parade of Lights” sponsored by the brewery which takes its name from the town. The parade is made up of floats that decorate different clubs in the city, among which there are Christmas characters such as Santa Claus and his elves. The parade lasts about two hours and brings together many locals in the main streets of the city.

– During the day, you can enjoy all that Tecate has to offer, such as the Casa de Artesanías, where you can buy clay, glass and wickerwork pieces. You can also visit the wine and cheese houses with their vineyards in the nearby Guadalupe Valley or head to the nearby town of La Rumorosa, with its spectacular road, rock paintings and even snowfall in winter.

Santuario Diegueño is a beautiful hotel that pays homage to the indigenous Kumiai tribes, which missionaries renamed Diegueños. It has 26 beautiful rooms, two restaurants and a swimming pool. Stroll through its gardens or take one of the guided tours of La Rumorosa or the Guadalupe Valley.