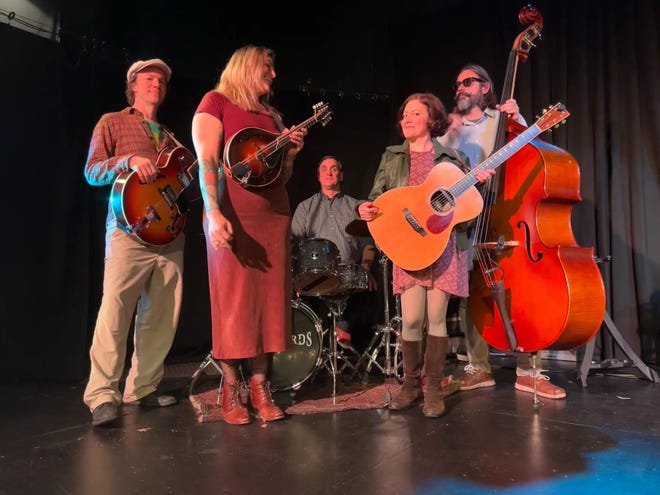 Roulette, by definition, is a game of random numbers.

Over the years, The Blushin’ Roulettes has played a numbers game with the public because fans don’t always know how many members will play.

“The name has always implied that you never know who you’re going to get and that leaves a lot of flexibility,” said guitarist and vocalist Angie Heimann. “It’s tricky because people are involved in so many other projects. It’s more fun and we get a bigger sound when it’s not just the two of us.

Heimann and her husband, Cas Sochacki (dobro and double bass), founded the band in California. They moved to Black Mountain nearly a decade ago but did not immediately continue with the band.

Two members died, and then the couple “hibernated for a while because we had a newborn baby,” Heimann said.

Earlier this year, however, Heimann and Sochacki decided to play more shows as The Blushin’ Roulettes. They added Cynthia McDermott (mandolin and vocals), Jay Brown (guitar and vocals) and James T. Browne (drums) to the mix to complete the old-timey sound.

Now, this quintet will release a 12-song collection, titled “Live at Farmstead.” The group will celebrate with an album release show at 8:30 p.m. on August 20 at Isis Music Hall. The music was recorded live at Sochacki’s Farmstead Studio with minor overdubs.

There are many musical ties within the band. Brown and Browne star together in Lazybirds. Brown, Heimann, Sochacki and Brown’s wife Aditi Sethi released an album together in 2018 under the name The Appalucians. McDermott knew Heimann and Sochacki in California and actually wrote a song over 10 years ago called “Can’t Be Tamed”, which is on the new album.

The new members bring a certain musical component to The Blushin’ Roulettes.

“Adding their abilities to that allowed us to get back into the more jazzy stuff and more honky-tonk stuff,” Heimann said. “The instrumentation allowed for a richer sound.”

Fourchestra comes back to town

Before the onset of the COVID-19 pandemic, Jonathan Scales moved from Asheville to New York.

Now, the famed steel panplayer is back to perform in town, when his band, Jonathan Scales Fourchestra performs at 9 p.m. on August 19 at Asheville Music Hall.

The band released their sixth album, “Pillar,” in 2018 and also released a behind-the-scenes documentary about the recording process.

Vince Gill was a major fixture in popular music long before he became a member of the Eagles.

The famous country music performer will play a show at 7:30 p.m. on August 25 at the Thomas Wolfe Auditorium.

Gill, who has won 18 Country Music Association and 22 Grammy Awards, is known for his country music classics such as ‘When I Call Your Name’, ‘I Still Believe In You’, ‘Tryin’ To Get Over You” and many others. After. In the 1990s, Gill had 21 Top 10 country music hits, including 18 Top 5 hits.

Gill began touring with The Eagles in 2017, following Glen Frey’s death, and continues to tour with the band now, including a recent tour that spotlighted the “Hotel California” album.

“When all touring came to a halt in March 2020, it was a good time for me to take a break from the road,” Gill said in a press release. “Now the Eagles are on tour again, and that’s great. But I’m also looking forward to getting back on the bus and visiting places and fans I haven’t seen in a while.

Three days of burlesque performances and classes are scheduled for August 19-21 at Gray Eagle.

The Land of the Sky Burlesque Festival will feature performers from across the country, as well as a selection of classes for those interested in this style of entertainment.

For more information about the festival, see the website, www.landofskyburlesque.com.

After more than 40 years, Windsor pediatrician Dr. Mark Awuku hangs up his stethoscope